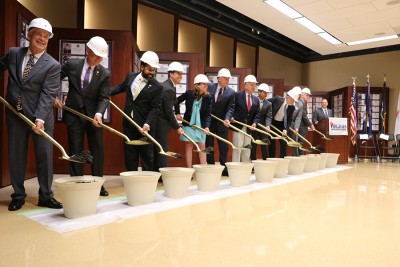 On Friday, June 16, Governor Terry McAuliffe and state leaders celebrated the official groundbreaking for the expansion of the Virginia War Memorial. The groundbreaking marked the start of construction at the Memorial to expand the Shrine of Memory and Paul and Phyllis Galanti Education Center, as well as add additional parking to accommodate the more than 70,000 people who visit the downtown Richmond facility annually.

“Today, we kickoff the much-needed expansion of this beautiful facility so that it can continue its mission to honor our veterans and educate the public,” said Governor McAuliffe. “We are fortunate to have this premiere war memorial here in Virginia. The expansion project reflects our Commonwealth’s enduring commitment to honor our fellow Virginians who have served our country and especially those who have made the ultimate sacrifice.”

“This expansion will allow us to honor those who died in Afghanistan, Iraq and in the ongoing Global War on Terrorism in the same way the Memorial honors the nearly 12,000 Virginians who lost their lives in World War II, Korea, Vietnam and the Persian Gulf. This way we can assure that their service and sacrifice is never forgotten,” said Delegate Rich Anderson, Chairman of the Virginia War Memorial Board.

The project includes nearly 28,000 square feet of new construction plus an underground parking deck with more than 170 spaces. The total budget for the project is approximately $25 million. The non-profit Virginia War Memorial Foundation has committed to raising $1,250,000 for the project, with the other 95 percent coming from state funding approved by the Governor and General Assembly.

The target completion date of the project is April 2019. The Virginia War Memorial will remain open to the public throughout the project to continue to fulfill its mission.

About The Virginia War Memorial

Dedicated in 1956, the Memorial includes the names of nearly 12,000 Virginia men and women who made the ultimate sacrifice during World War II, Korea, Vietnam, the Persian Gulf and the Global War on Terrorism. The 18,000 square foot Paul and Phyllis Galanti Education Center was dedicated in September 2010. The Memorial is located at 621 South Belvidere Street on over four acres overlooking downtown Richmond and the James River.

The Virginia War Memorial is a division of the Virginia Department of Veterans Services and serves as an integral part of its mission in support of all Virginians who served or serve in our military forces. For more information, go to www.vawarmemorial.org or www.dvs.virginia.gov.

The Virginia Department of Veterans Services (VDVS) operates 28 benefit offices that assist veterans and their family members in filing claims for federal veterans benefits; two veterans care centers offering in-patient skilled nursing care, Alzheimer’s/memory care, and short-term rehabilitative care for veterans, and three veterans cemeteries that provide an honored final resting place for veterans and their families. VDVS provides veterans and family members with direct linkages to needed services including behavioral healthcare, housing, employment, education, and other programs. The Department also operates the Virginia War Memorial, the Commonwealth of Virginia’s monument to honor the memory of Virginia’s men and women who demonstrated a willingness to serve and fight to defend our way of life from World War II to the present. To learn more, visit www.dvs.virginia.gov.