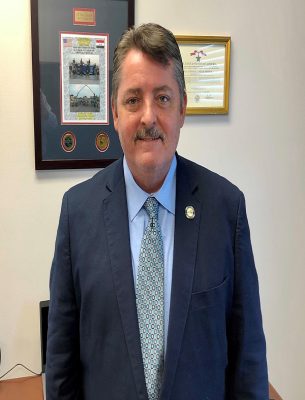 “We welcome Mike Henshaw to the VDVS leadership team,” said John Maxwell, VDVS Commissioner. “With his extensive background in cemetery management with the VA and U.S. Army service in mortuary affairs, he will play a tremendous role in our service to Virginia veterans and their families.”

Henshaw previously served in a number of Director-level roles in the U.S. Department of Veterans Affairs (VA) National Cemetery Administration including as Director of national veteran cemeteries in Illinois, Ohio, Tennessee and California from 2013-2017.

He retired from the U.S. Army with twenty-five years’ service in 2009. His duties included serving as the Operations Officer for the Joint Mortuary Affairs Center at Fort Lee, Va. where he served as a mortuary affairs non-commissioned officer in charge of search and recovery teams responsible for locating, recovering and repatriating the remains of U.S. service members missing in action overseas from World War II, the Korean War, and Vietnam War. He also served in both the Operation Iraqi Freedom and Desert Storm campaigns earning two Bronze Stars and other military honors.

Most recently, Henshaw lived in Thailand for three years where he assisted American families and the U.S. government in investigating the fate of prisoners-of-war and service members missing-in-action in Cambodia, Laos and Vietnam.

The Virginia Department of Veterans Services (DVS) is a state government agency with more than 40 locations across the Commonwealth of Virginia.  DVS traces its history to 1928 and the establishment of the Virginia War Service Bureau to assist Virginia’s World War I veterans.  Today, DVS assists veterans and their families in filing claims for federal veterans benefits; provides veterans and family members with linkages to services including behavioral healthcare, housing, employment, education and other programs.  The agency operates two long-term care facilities offering in-patient skilled nursing care, Alzheimer’s/memory care, and short-term rehabilitation for veterans; provides an honored final resting place for veterans and their families at three state veterans cemeteries.  It operates the Virginia War Memorial, the Commonwealth’s tribute to Virginia’s men and women who gave the ultimate sacrifice from World War II to the present. For more information, please visit www.dvs.virginia.gov.