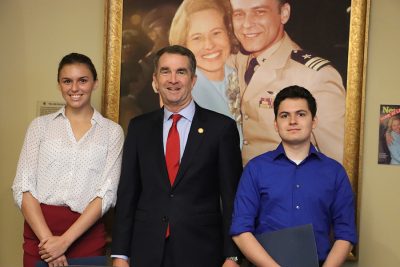 The Virginia War Memorial has announced the 2019 recipients of its Marocchi Memorial Scholarships. Receiving $2,500 college scholarships are:

Clark and Lloyd were recognized at the 63nd Annual Commonwealth’s Memorial Day Ceremony at the Virginia War Memorial in Richmond on May 27.  Virginia Governor Ralph Northam, the keynote speaker at the ceremony, met with both students and congratulated them in a meeting preceding the event.

The scholarships were established in memory of the late Rear Admiral John Marocchi, who served in the United States Navy for decades in a career that spanned World War II, the Korean War and the Vietnam War. Admiral Marochi was the recipient of the Purple Heart, Legion of Merit and was one the few Navy officers to complete Army Airborne training. He was a member of the Virginia War Memorial Board of Trustees for over fifteen years.

The Marocchi Memorial Scholarships are open to any student enrolled in the senior class of an accredited public or private high school or home school program in the Commonwealth of Virginia and who is a U.S. citizen or permanent resident at the time of application. The applicant must also be planning to pursue a program of study in a Reserve Officer Training Program (ROTC) at a Virginia public or private university that will lead to a career in the U.S. Military Service. He or she must also possess an unweighted minimum Grade Point Average (G.P.A.) of 2.75.

Complete details, including application forms and a list of required documents, are available online at vawarmemoral.org/scholarships or by contacting Morgan Guyer, Assistant Director of Education at the Virginia War Memorial at morgan.guyer@dvs.virginia.gov. Applications for the 2020 Marocchi Memorial Scholarships will open in September.

The mission of the Virginia War Memorial is to Honor Veterans, Preserve History, Educate Youth and Inspire Patriotism in All. Dedicated in 1956, the Memorial includes the names of the nearly 12,000 Virginia heroes who made the ultimate sacrifice during World War II, Korea, Vietnam, the Persian Gulf and the Global War on Terrorism. The Memorial is currently undergoing a major $28 million expansion project to be completed by September 2019. The Virginia War Memorial is a division of the Virginia Department of Veterans Services and serves as an integral part of its mission in support of all Virginians who have served in our military.

The Virginia Department of Veterans Services (DVS) is a state government agency with more than 40 locations across the Commonwealth of Virginia.  DVS traces its history to 1928 and the establishment of the Virginia War Service Bureau to assist Virginia’s World War I veterans.  Today, DVS assists veterans and their families in filing claims for federal veterans benefits; provides veterans and family members with linkages to services including behavioral healthcare, housing, employment, education and other programs. The agency operates two long-term care facilities offering in-patient skilled nursing care, Alzheimer’s/memory care, and short-term rehabilitation for veterans; provides an honored final resting place for veterans and their families at three state veterans cemeteries. It also oversees the Virginia War Memorial, the Commonwealth’s tribute to Virginia’s men and women who gave the ultimate sacrifice from World War II to the present. For more information, please visit www.dvs.virginia.gov.