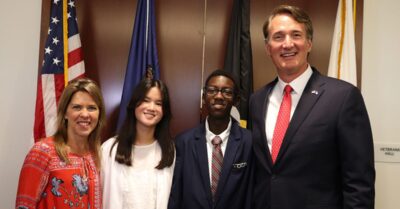 The winner in the middle school category is Mason Bibby, who attends North Cross School in Roanoke.  His teacher is Mrs. Robin Garrett.

The winner in the high school category is Katie Wittenbraker, a 10th grade student at Monacan High School in Chesterfield.  Ms. Erica Harris is her teacher.

The annual contest was open to middle and high school age students throughout Virginia enrolled in public or private schools or homeschooled. The essay topic for the 2022 competition was, “A Virginian who served in the United States Military during the Vietnam War who inspires me.”

The contest winners, Mason Bibby and Katie Wittenbraker, traveled to Richmond accompanied by their parents and teachers, and read aloud their essays on stage as part of the Commonwealth’s Veterans Day Ceremony.  Each winner received a prize package presented by the Virginia War Memorial Foundation.

“We join with all our fellow Virginians in congratulating Katie and Mason on their winning entries in our 2022 Veterans Day Student Essay Contest and also congratulate all of the students from throughout the Commonwealth that took the time to write essays and participated this year,” said Dr. Clay Mountcastle, Virginia War Memorial Director. “Thanks also to Katie and Mason’s teachers, Mrs. Garrett and Ms. Harris, who encouraged them to write their submissions. Educating our young people and passing on the stories of service and sacrifice of our men and women who served is one of our most important missions here at the Virginia War Memorial. With their inspiring words, these students demonstrate the importance of this mission.”

The winning essays are posted online on the Virginia War Memorial’s  website.

The mission of the Virginia War Memorial is to Honor Veterans, Preserve History, Educate Youth and Inspire Patriotism in All.  Dedicated in 1956, the Memorial includes the names of the nearly 12,000 Virginia heroes who made the ultimate sacrifice during World War II, the Korean, Vietnam and Persian Gulf Wars, and the Global War on Terrorism. The Virginia War Memorial is and will always be the Commonwealth’s tribute to those who served and most especially, to those who died defending our freedoms.  The Virginia War Memorial is a division of the Virginia Department of Veterans Services and serves as an integral part of its mission in support of all Virginians who have served in our military. It is located at 621 South Belvidere Street, Richmond, Virginia 23220. For more information, please visit www.vawarmemorial.org.

The Virginia Department of Veterans Services (DVS) is a state government agency with more than 40 locations across the Commonwealth of Virginia. DVS traces its history to 1928 and the establishment of the Virginia War Service Bureau to assist Virginia’s World War I veterans. Today, DVS assists veterans and their families in filing claims for federal veterans benefits; provides veterans and family members with linkages to services including behavioral healthcare, housing, employment, education and other programs. The agency operates two long-term care facilities offering in-patient skilled nursing care, Alzheimer’s/memory care, and short-term rehabilitation for veterans; and provides an honored final resting place for veterans and their families at three state veterans cemeteries. It operates the Virginia War Memorial, the Commonwealth’s tribute to Virginia’s men and women who gave the ultimate sacrifice from World War II to the present. For more information, please visit www.dvs.virginia.gov.