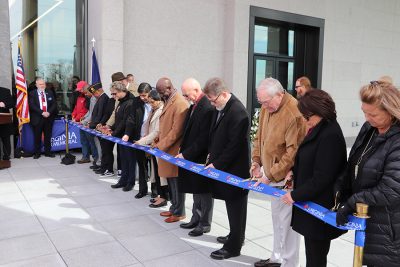 More than 800 persons, including U.S. Senator Tim Kaine and members of Gold Star families from throughout the Commonwealth gathered to officially open, dedicate, and tour the recently completed $25 million expansion project.

Ken Adams, Chief Emeritus of the Upper Mattaponi Nation and Powhatan Red Cloud Owen of the Chickahominy Nation were joined by representatives of their tribes to bless the expanded Shrine of Memory and Wright Pavilion. Patriotic music was provided by the Virginia Military Institute Regimental Band and VMI Herald Trumpets.

“All Virginians can be proud that this Memorial is often praised as the premier state war memorial in America,” said Dr. Clay Mountcastle. “The major expansion further signifies its position as a true living museum and educational institution and not simply a passive space for remembrance and contemplation. Our mission is to tell the stories of these heroes and their service and sacrifice every day and to every new generation.”

The names of the nearly 12,000 Virginia men and women who gave the ultimate sacrifice during World War II, Korea, Vietnam, and the first Persian Gulf War are etched on the Memorial’s Shrine of Memory-20th Century.  The Memorial’s new Shrine of Memory-Global War on Terrorism and Beyond similarly honors those killed in Iraq, Afghanistan, Lebanon, the Pentagon, and other locations throughout the world.

The Memorial was last expanded in 2010 with the opening of the 18,000 square foot Paul and Phyllis Galanti Education Center. The Galanti Center houses the American Legion exhibit gallery, a movie theater, classroom and meeting spaces, and the E. Bruce Heilman Amphitheater.  The Memorial is located on 4 1/2 acres overlooking the James River Valley in downtown Richmond.

The public is invited and encouraged to visit the Virginia War Memorial Monday-Saturday from 9 a.m. to 4 p.m. and Sunday, 12 noon to 4 p.m. Additional public events are held during evening hours. Admission and parking are free, except for selected events as noted.  The Virginia War Memorial is a division of the Virginia Department of Veterans Services and serves as an integral part of its mission in support of all Virginians who have served in our military.

For a complete schedule and more information, please visit www.vawarmemorial.org or www.dvs.virginia.gov or telephone 804.786.2060.

The Virginia Department of Veterans Services (DVS) is a state government agency with more than 40 locations across the Commonwealth of Virginia.  DVS traces its history to 1928 and the establishment of the Virginia War Service Bureau to assist Virginia’s World War I veterans.  Today, DVS assists veterans and their families in filing claims for federal veterans benefits; provides veterans and family members with linkages to services including behavioral healthcare, housing, employment, education and other programs. The agency operates two long-term care facilities offering in-patient skilled nursing care, Alzheimer’s/memory care, and short-term rehabilitation for veterans; provides an honored final resting place for veterans and their families at three state veterans cemeteries. It also oversees the Virginia War Memorial, the Commonwealth’s tribute to Virginia’s men and women who gave the ultimate sacrifice from World War II to the present. For more information, please visit www.dvs.virginia.gov.