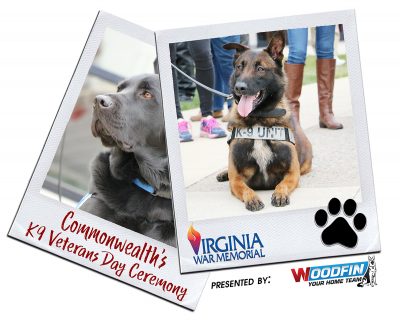 Virginia will again commemorate K-9 Veterans Day in the Commonwealth on Saturday, March 9 from 10:00 a.m.- 12:00 noon at the Virginia War Memorial in Richmond.

The 6th Annual Commonwealth’s K-9 Veterans Day Ceremony, presented by Woodfin – Your Home Team, is a family-friendly event. The purpose is to honor the contributions of the heroic dogs that serve side-by-side with their human companions on the battlefield, here at home assisting police and law enforcement agencies, performing search and rescue missions, and providing companionship to military and civilian hospital patients and veterans.

There is no admission charge for this outdoor event. The Virginia War Memorial’s Paul and Phyllis Galanti Education Center will also open for tours from 9 a.m.-4 p.m. For safety reasons, NO personal pets will be allowed on the Memorial grounds during this program.

The ceremony will include the “Parade of Hounds,” led by Korean War veteran Tommy “Uncle Sam” Sammons, and performances by K-9 units on the Memorial’s Frank Hargrove Plaza. The Marine Corps Base Quantico Military Working Dogs will perform at, followed by the Virginia Capitol Police K-9s., and the Hanover Hounds Search and Rescue K-9 team. Representatives from Canine Companions and Leashes of Values will also be on site.

In 2013, the Virginia General Assembly joined the legislatures of 13 other states in passing a resolution to annually designate March 13 as K-9 Veterans Day. This date was chosen as on this

General to include dogs in the military effort to win World War II.

“The Virginia War Memorial is proud to again host the Commonwealth’s K-9 Veterans Day Ceremony for the sixth consecutive year and pleased to welcome back our sponsor, Woodfin,” said Dr. Clay Mountcastle, Virginia War Memorial Director. “The Memorial is a fitting venue to honor the service and sacrifice of our military, law enforcement, and service dogs whether they serve on the battlefield or in our communities.”

“While the official date of K-9 Veterans Day is March 13, our event is held on Saturday, March 9 so that families with school-aged children can attend and see these amazing dogs in action,” Mountcastle added.

For more information, please call 804.786.2060 or visit www.vawarmemorial.org/event/k9-veterans-day-presented-woodfin-your-home-team  or www.dvs.virginia.gov.

The mission of the Virginia War Memorial is to Honor Veterans, Preserve History, Educate Youth and Inspire Patriotism in All. Dedicated in 1956, the Memorial includes the names of the

nearly 12,000 Virginia heroes who made the ultimate sacrifice during World War II, Korea,

Vietnam, the Persian Gulf and the Global War on Terrorism. The Virginia War Memorial is a division of the Virginia Department of Veterans Services and serves as an integral part of its mission in support of all Virginians who have served in our military.

The Virginia Department of Veterans Services (DVS) operates 32 benefit offices throughout the state that assist military veterans and their families in filing claims for federal veterans benefits; two long-term care facilities offering in-patient skilled nursing care, Alzheimer’s/memory care, and short-term rehabilitative care for veterans; and three cemeteries that provide an honored final resting place for veterans and their families.  DVS provides veterans and family members with direct linkages to services including behavioral healthcare, housing, employment, education and other programs.  The Department also operates the Virginia War Memorial, the Commonwealth’s monument to honor the memory and sacrifice of Virginia’s men and women who served and fought to defend our way of life from World War II to the present. For more information, please visit www.dvs.virginia.gov.