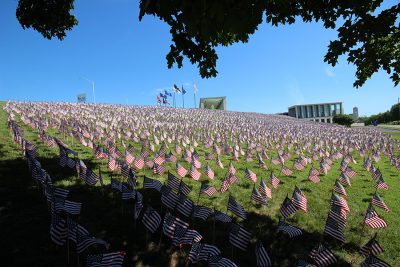 Twelve thousand American flags will be placed on the grounds of the Virginia War Memorial on June 25 to honor and remember the nearly 12,000 Virginia men and women who made the ultimate sacrifice in service to our Nation from World War II to the present day.  The Hill of Heroes will be on display through July 9.

This is the third year that the Virginia War Memorial has presented the Hill of Heroes to honor the brave Virginians whose names are inscribed on the walls of the Memorial’s Shrines of Memory.

More than 100 hundred volunteers, including from community and veteran service organizations, will assist in placing the flags, which are a solemn yet inspirational tribute to those who paid the ultimate price to protect the freedoms of all Americans.

“We invite everyone to come see the Hill of Heroes,” said Dr. Clay Mountcastle, Virginia War Memorial Director. “With the lifting of the COVID-19 restrictions, the Memorial’s Shrine of Memory – 20th Century, Shrine of Memory – Global War on Terrorism and Beyond, Paul and Phyllis Galanti Education Center, and C. Kenneth Wright Pavilion are again open seven days a week for visitation, including on Independence Day, July 4.”

“There are many new exhibits to see that have been added in the past 18 months, including the Virginia Medal of Honor Recipients Gallery, the Veterans Art Gallery, and more,” Mountcastle added. “There is no admission charge to visit the Virginia War Memorial and with the addition of our new parking deck, parking is plentiful and also free.”

For more information on the Hill of Heroes and the Virginia War Memorial, including visitation hours and directions, please visit www.vawarmemorial.org or call 804.786.2060.

The Virginia Department of Veterans Services (VDVS) is a state government agency with more than 40 locations across the Commonwealth of Virginia. VDVS traces its history to 1928 and the establishment of the Virginia War Service Bureau to assist Virginia’s World War I veterans. Today, VDVS assists veterans and their families in filing claims for federal veterans benefits; provides veterans and family members with linkages to services including behavioral healthcare, housing, employment, education and other programs. The agency operates two long-term care facilities offering in-patient skilled nursing care, Alzheimer’s/memory care, and short-term rehabilitation for veterans; provides an honored final resting place for veterans and their families at three state veterans cemeteries. It also operates the Virginia War Memorial, the Commonwealth’s tribute to Virginia’s men and women who gave the ultimate sacrifice from World War II to the present. For more information, please visit www.dvs.virginia.gov.