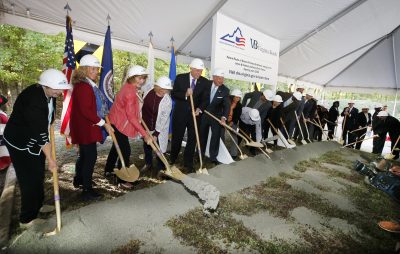 VIRGINIA BEACH – Governor Terry McAuliffe today broke ground on the new Jones & Cabacoy Veterans Care Center in Virginia Beach.  The 128-bed long-term care and rehabilitation facility will be built on 26 acres located in the Princess Anne area of Virginia Beach. The new facility is named in honor of Air Force Colonel William A. Jones III and Army Staff Sergeant Christopher F. Cabacoy in honor of their heroic service to the United States.

“I am proud to be here today to break ground on the new Jones & Cabacoy Veterans Care center, named for two Tidewater natives, who bravely served both Virginia and our nation,” said Governor McAuliffe. “A top priority for my administration has been to make Virginia the most veteran-friendly state in the nation, and by building this new care center in Hampton Roads we are keeping that promise. This new 128-bed facility will provide veterans, who call Hampton Roads home, with the skilled nursing, Alzheimer’s and memory care, and short-term rehabilitative services that they deserve.”

“It is another great day in the Commonwealth as we honor our veterans’ service with the groundbreaking of the new Jones and Cabacoy Veterans Care Center,” said Secretary of Veterans and Defense Affairs Carlos Hopkins. “This bipartisan effort led by Governor McAuliffe and members of our General Assembly will ensure that our veterans who require long-term care receive top notch services in a state of the art facility. It is also a great way to honor the service and sacrifice of two great Virginia families, the Jones and Cabacoy families.”

“We are proud that Virginia Beach was chosen for the new veterans care center,” said William D. Sessoms, Jr., Mayor of the City of Virginia Beach. “The thousands of active duty service members, family members, and veterans who live and work here are a critical part of this community.  This new care center will provide exceptional service to those who have worn the cloth of our country.”

About the Jones and Cabacoy Legacy
Colonel William A. Jones, III
was born in Norfolk, Va. He graduated from West Point in1945 and then transferred to the newly formed U.S. Air Force. He served in the Vietnam War with distinction and received the Medal of Honor for acts of conspicuous gallantry and intrepidity in action when, in 1968, he went on a rescue mission to retrieve a fellow pilot, took on enemy fire, managed to return to base safely, and conveyed all information to save the pilot before seeking medical treatment for himself. Jones died in an airplane accident near Woodbridge, Va. in 1969.

Army Staff Sergeant Christopher F. Cabacoy was a Virginia Beach native. He graduated from Tallwood High School in 1997 and studied engineering at Old Dominion University before joining the U.S. Army in 2000. He served 10 years with distinction in the U.S. Army, assigned to the 1st Squadron, 71st Armor Regiment, 1st Brigade Combat Team of the 10th Mountain Division based at Ft. Drum, N.Y. He died on July 5, 2010 when insurgents in Kandahar attacked his vehicle with a homemade bomb.