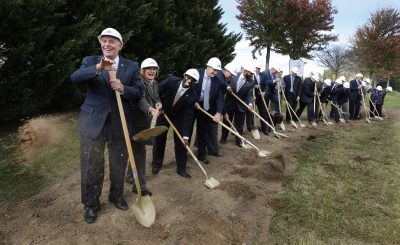 Va. Gov. Terry McAuliffe, L, reacts as dirt is flying past as he and Mrs. Martha Puller Downs and Va. Sec. of Veterans and Defense Affairs Carlos Hopkins led a host of other officials in the groundbreaking for the Puller Veterans Care Center in Faquier County on Thursday, Oct. 26, 2017.

WARRENTON – Governor Terry McAuliffe today broke ground on the new Puller Veterans Care Center in Fauquier County. The 128-bed long-term care and rehabilitation facility will be built on 30 acres located on the former Vint Hill Farms Station, which previously served as a U.S. Army and National Security Agency facility. The new facility is named in honor of General Lewis Burwell “Chesty” Puller, Lieutenant Lewis B. Puller, Jr., and his wife, former State Senator Linda “Toddy” Puller for their legacy of service to the United States and the Commonwealth of Virginia.

“I am proud to break ground today on the Puller Veterans Care Center, which is one of two new centers that will serve those who’ve bravely worn our nation’s uniform,” said Governor McAuliffe. “This state-of-the-art 128-bed facility will ensure that our veterans in Northern Virginia will have the skilled nursing, Alzheimer’s and memory care, and short-term rehabilitative services they need and have earned. As governor, I promised to make Virginia the most veteran-friendly state in the nation and, thanks to the hard work of my team and our many partners, I’m proud to say we’ve kept that promise today.”

“This is another example of Virginia’s great leadership in looking after our veterans,” said Secretary of Veterans and Defense Affairs Carlos Hopkins. “The efforts of the Governor and bipartisan leaders in the General Assembly have led to the construction of this wonderful facility to care for our deserving veterans. It is more than appropriate to name it after a Virginia family of public servants who have sacrificed so much on behalf of our Commonwealth and our nation.”

“The new Puller Veterans Care Center will provide top-quality care to Virginia veterans in a beautiful home-like setting here at Vint Hill,” said John L. Newby II, Commissioner, Virginia Department of Veterans Services. “It confirms and demonstrates the Commonwealth’s continued dedication and commitment to serving our veterans and their families.”

“All of us who call Fauquier County home are very pleased that the Vint Hill site was chosen for the new veterans care center,” said Richard R. Gerhardt, Chairman, Fauquier County Board of Supervisors. “The thousands of veterans who live and work here are a critical part of this community and this care center will offer many of them the care they deserve for their unselfish service.”

About the Puller Family Legacy

A native of West Point, Virginia, General Lewis Burwell “Chesty” Puller served with distinction in Central America, World War II, and Korea before retiring in 1955. He is one of only two persons to receive five Navy Crosses and one of the most decorated and revered U.S. Marines in history. He passed away in 1971.

Lt. Lewis B. Puller, Jr. served in Vietnam in 1968 where he was severely wounded leading his platoon, losing his right leg at the hip, left leg below the knee, left hand and several fingers of his right hand. He was awarded the Purple Heart and other military honors. He graduated from the College of William & Mary’s Marshall-Wythe School of Law.  He died in 1994 shortly after receiving the Pulitzer Prize for his autobiography.  The Lewis B. Puller, Jr. Veterans Benefits Clinic at the College of William & Mary is named in his honor.

Lt. Puller met his wife, Linda Todd or “Toddy,” when she was a schoolteacher in Woodbridge, Virginia. In 1991, she was elected to the Virginia House of Delegates and in 1999 won a seat in the Virginia State Senate. She retired from public service in 2015. During her nearly 15 years serving in the General Assembly, she was a tireless advocate for Virginia’s active military, veterans and their families.