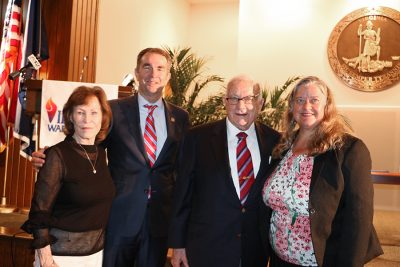 & Audrey Pope of the Wright Foundation

The gift, which is the largest ever individual or corporate donation to the Memorial and its non-profit Foundation, will be used to support educational programs, exhibits and capital projects at the Virginia War Memorial.  In recognition for service to the nation and for his philantrophy, the Memorial’s new addition, now under construction, will be named The C. Kenneth Wright Pavilion.

“Mr. C. Kenneth Wright proudly served in the U.S. Army Air Corps during World War II before returning home to Richmond to begin his business career. On behalf of all Virginians, I want to thank him for his service to our country and for his generosity with this gift,” said Governor Northam. “This contribution will allow us to continue sharing the stories of service and sacrifice of the more than 12,000 Virginians honored at the Virginia War Memorial for generations to come.”

The Governor noted that the Virginia War Memorial is a unique public-private partnership. Dedicated in 1956, the Memorial is a division of the Virginia Department of Veterans Services. The Commonwealth is responsible for the facility, which is currently undergoing a $28 million dollar expansion, while the non-profit Virginia War Memorial Foundation provides financial support for the Memorial’s student and teacher educational programs and outreach, documentary films, historical exhibits, theatres and major capital projects.

“The new Pavilion will include a new Medal of Honor gallery, a distance learning studio, a veterans art gallery, a research library, a 350-seat lecture hall and administrative offices,” said Rear Admiral John Hekman, Executive Director of the Virginia War Memorial Foundation. “Ken Wright’s gift will help the Foundation strengthen our endowment while we continue our $2 million Capital Campaign to raise additional funds committed to the current construction and expansion at the Memorial and for our ongoing educational and patriotic programs.”

Virginia War Memorial board member John V. Cogbill III noted that Kenneth Wright and his late wife, Dianne, devoted their lives to philanthropy even before selling their successful rental car business in 1999. They supported the expansion of the Downtown Richmond YMCA, and established the Wright Scholarships for Richmond high school students pursuing higher education. Their gifts to Virginia Commonwealth University (VCU) have totaled more than $40 million.  In appreciation of this extraordinary support, VCU honored Kenneth Wright with the Michael B. Dowdy Award, the Lifetime Achievement in Philanthropy and an honorary doctorate of humane letters.

The Virginia War Memorial’s mission is Honor Veterans, Preserve History, Educate Youth and Inspire Patriotism in All. Dedicated in 1956, the Memorial includes the names of the nearly 12,000 Virginia heroes who made the ultimate sacrifice during World War II, Korea, Vietnam, the Persian Gulf and the Global War on Terrorism. The Virginia War Memorial is a division of the Virginia Department of Veterans Services and serves as an integral part of its mission in support of all Virginians who served in our military forces. The Memorial is located at 621 South Belvidere Street in Richmond. For more information and directions, please visit www.vawarmemorial.org  or www.dvs.virginia.org/virginia-war-memorial

About the Virginia War Memorial Foundation

The Virginia War Memorial Foundation (VWMF) is a 501 (c) (3) non-profit corporation established in 2000 to provide financial support to the educational, historical and patriotic exhibits, programs and outreach of the Virginia War Memorial. The Foundation depends on the contributions of thousands of individual donors, corporations, veteran and civic organizations, and other foundations to provide the funds necessary to fulfill its vital mission. For more information, go to www.vawarmemorial.org.

care, and short-term rehabilitation for veterans; and three cemeteries that provide an honored

final resting place for veterans and their families. VDVS provides veterans and family members with direct linkages to services including behavioral healthcare, housing, employment, education and other programs.  The Department also operates the Virginia War Memorial, the Commonwealth’s monument to honor the memory and sacrifice of Virginia’s men and women who served and fought to defend our way of life from World War II to the present. For more information, please visit www.dvs.virginia.gov