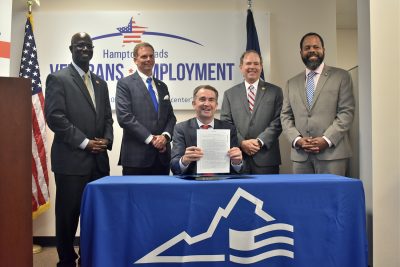 Yesterday, at a special ceremony at the Hampton Roads Veterans Employment Center in Norfolk, Governor Ralph Northam signed legislation making the Virginia Department of Veterans Services’ Military Medics and Corpsmen (MMAC) Program permanent. He also charged the MMAC team with hiring 300 qualified veterans through the Program by the end of his administration.

“As a former Army doctor, I worked alongside military medics while treating soldiers injured during Desert Storm,” said Governor Northam. “Our medics and corpsmen have extensive training and valuable experience, but unfortunately until Virginia took the lead in establishing the MMAC Program that recognizes this service, it was difficult for them to use these skills as they transitioned to the civilian workforce. Over the past two years, working with our partner healthcare systems across the Commonwealth, MMAC has proven to be a great success. I am pleased to be signing this legislation, making the program permanent.”

Established by the Virginia General Assembly as a pilot program in 2016, MMAC provides a path to careers in the civilian healthcare industry for recently discharged Army Medics, Navy and Coast Guard Corpsmen, and Air Force Medical Technicians. MMAC collaborates with major healthcare systems across the Commonwealth to provide employment for former medics, corpsmen, and technicians, allowing veterans to maintain their clinical skills while obtaining the required civilian medical credentials. Since the program’s inception, 76 veterans have been hired in civilian healthcare, and 43 of those veterans met the qualifications to practice specific advanced skills learned in the military.

“I want to express my appreciation to my fellow physician, Delegate Christopher Stolle for patroning this legislation in the House, to Senator George Barker for his leadership in patroning this bill in the Senate. I also want to thank all of our members of the General Assembly who supported this program that again shows why Virginia is the most veteran-friendly state in America,” the Governor added.

MMAC was modeled after the highly successful Veterans Health Administration Intermediate Care Technician Pilot Program, which operated in 15 federal Veterans Affairs Medical Centers. Virginia was the first state in the country to create a program of this nature, with other states now beginning to implement similar programs.

“All of us recognize that the MMAC Program has been and will continue to be successful because of the collaboration and input from many of the Commonwealth’s top healthcare systems,” said Secretary of Veterans and Defense Affairs Carlos Hopkins. “The MMAC Program is a true example of our innovative initiatives and public-private partnerships that help our service members transition to the civilian workforce and contribute to the economic well-being of the Commonwealth.”

“As a retired Naval Officer and physician myself, I can personally attest to the relevant, real-world experience military medics and corpsmen hold from their extensive military education and training,” said Delegate Christopher Stolle. “They are outstanding candidates to fill gaps in Virginia’s healthcare workforce. I am pleased to see so many health systems making moves towards capturing the clinical skills and overall talent and experience that our veterans bring to the healthcare industry.”

The Virginia Department of Veterans Services (VDVS) operates 30 benefit offices throughout the state that assist military veterans and their families in filing claims for federal veterans benefits; two long-term care facilities offering in-patient skilled nursing, Alzheimer’s/memory care, and short-term rehabilitation for veterans; and three cemeteries that provide an honored final resting place for veterans and their families. VDVS provides veterans and family members with direct linkages to services including behavioral healthcare, housing, employment, education and other programs.  The Department also operates the Virginia War Memorial, the Commonwealth’s monument to honor the memory and sacrifice of Virginia’s men and women who served and fought to defend our way of life from World War II to the present. For more information, please visit www.dvs.virginia.gov.